Back in 2014, close to summer solstice, I visited Rotterdam for the first time. Being there only a day and knowing only a hint of what to expect, I was struck by the relatively wide streets, the long and burdensome wait times as a pedestrian and a built form (both in terms of urban but also building form) that was in search of definition. I also remember initial observations of the relatively long days, Dutch food, “more” advanced payment systems, Dutch hospitality in hotels (or lack there-of) and the relatively more ‘direct/matter-of-fact’ way of conducting business.

Three years after the initial visit, having had the opportunity to learn more about the ‘ins and outs’ of most things Dutch, I looked forward to returning. This past summer was going to be that occasion during a family bike trip, however 50 mph winds suggested otherwise (see 1:25), therefore requiring a detour. This past week I had the opportunity to return to Rotterdam for a few hours and my observations above still stand for this city (and the culture), albeit with a bit more refinement.

Here are five additional observations after delving deeper into the city that houses the largest port in all of Europe (and visiting, this time, close the winter solstice). 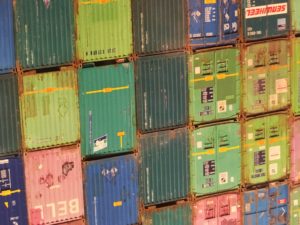 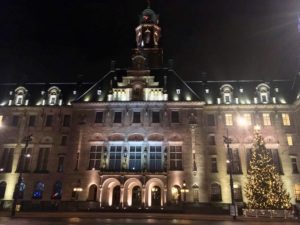 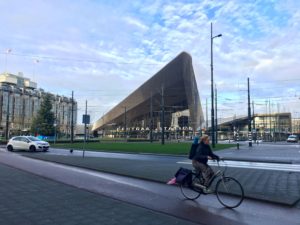 -The spirit of Rem Koolhaas clearly lives. The post-war era buildings clearly prize concept over context, with apparent aspirations of “starchitects.” The central train station is just one example of many.

-As a big city on the train line connecting Brussels and Paris (to the South) with Amsterdam (to the North), the diversity in types of trains in the Netherlands is more apparent here than in the rest of the country. The debacle of the high-speed rail purchase is worth of note and not something that I learned about previously.

-Blissfully riding a bicycle within the immediate orbit of truck-size intermodal containers–sometimes stacked six high–is an exhilarating experience in and of itself.

-On May 14, 1940, the spectacular City Hall was saved from the WWII bombings which annihilated a reported 31 department stores, 13 banks, 19 consulates, 2 museums, 4 churches, 22 cinemas, 517 cafes. How the city seat of government survived is apparently is anyone’s guess.

-A remarkable transport gem is the roughly 1 km ‘under-the Maas-river’ cycling tunnel with its almost century’s worth of history.

Published in nl and Uncategorized